Open or Closed? Office Design is Not Always an Open and Shut Case 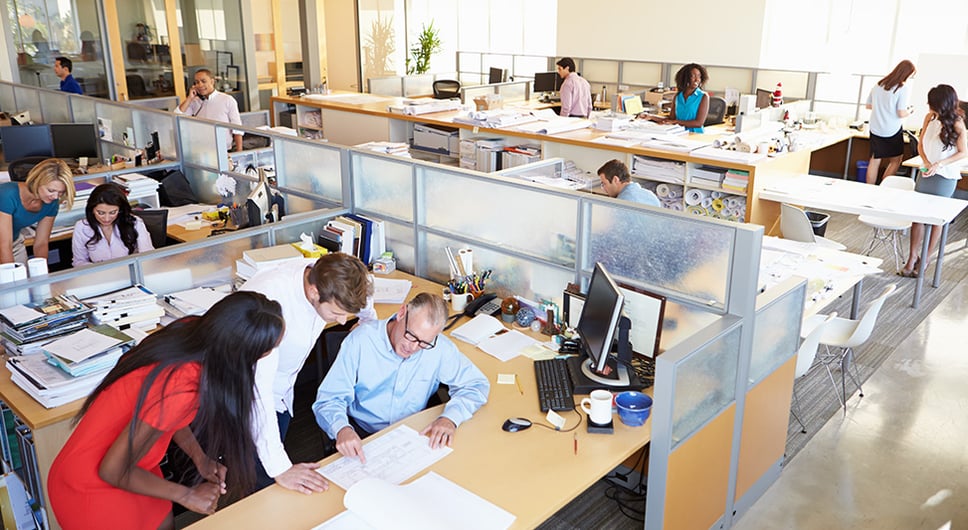 Office design is more than a mere arrangement of furniture, it’s actually a major factor that helps determine the culture, level of employee satisfaction, and productivity of your organization. With many studies and surveys talking about the advantages and drawbacks of specific office arrangements, it may be difficult to decide which option is the right one for your workplace. Open offices have come under fire recently, but are still used by some of the most successful tech giants, while closed, or cell, office plans have been scrutinized extensively in pop culture for decades. So which design is best for your organization? Our comparison of the most popular office structures can help you make the right choice.

Open plans were re-invented by startups during the dot-com boom of the nineties, so it is unsurprising that this office design is the easiest on the budget and the most economical on space. Coming out of garages and converted warehouses that were the birthplaces of today’s technology heavy-hitters like Google and Facebook, open plans are characterized by the absence of walls or barriers of any kind, and a general bench structure with side-by-side workspaces where co-workers rub elbows, both metaphorically and literally.

The idea behind this design is based on the premise that humans are intrinsically social creatures and will benefit from increased exposure to their peers. The lack of physical boundaries is meant to improve communication and increase a sense of “openness,” encouraging a cooperative atmosphere and greater camaraderie. Even hierarchy structures are levelled by open plans, where it is often emphasized that everyone, regardless of their place on the corporate ladder, has the same communal workplace experience.

As popular as open-concept offices are, there’s a lot of evidence to suggest that they don’t actually provide an ideal working environment. Researchers have concluded that in the absence of a private workspace, productivity and employee health tend to suffer. Due to the noise of conversation, office hubbub, and general day-to-day operations, workers were constantly distracted from their tasks, needing time to refocus when returning to their duties. Staying healthy becomes a tremendous challenge, too. Due to the close quarters of an open-concept space, co-workers have nowhere to run during flu season, resulting in 62% more absences because of illness.

In addition, the face-to-face interaction that the open layout was meant to foster actually becomes significantly decreased, because “open architecture appear[s] to trigger a natural human response to socially withdraw from officemates and interact instead over email and IM.” There is an increased chance for interactions, but it isn’t utilized as often as open plan offices intend. So why do so many companies choose an open plan for their employees? There are substantial savings involved in decreasing the amount of space allocated to each employee. According to Azure Magazine, “open offices allow companies to cram more people into fewer square feet, and can cost 50 per cent less than traditional layouts,” which is a pretty strong incentive.

The “closed” office layout, also known as the private or cell office layout, offers everything the open plan doesn’t – privacy, quiet workspaces that foster focus, and less chance of catching a winter cold. Of course, with doors, partitions and walls, it’s much harder to see what every employee is doing at any given time. According to a study from the University of Melbourne, a little downtime can improve productivity rather than hinder it. The study showed that employees who succumbed to a little social media time saw a 9% improvement in their output. So even any downtime happening behind closed doors could be a benefit to the organization as a whole.

A closed office layout is generally considered a more old-fashioned option, and consequently, layouts with private offices can be interpreted as maintaining the status quo of a hierarchy, which many organizations are working towards eliminating. However, the rigid and obvious symbol of the corporate ladder is not necessarily a disadvantage, as motivational aspects such as a corner office with a view may help improve productivity and morale. Despite the advantages, closed-concept office spaces come at a price that most companies find prohibitively high, due to the up-front financial investment in significant square-footage. Even the much-dreaded and Dilbert-critiqued cubicles of the past take up more office real estate than long-table workstations.

For more social and collaborative employees, a closed office arrangement can feel both oppressive and confining. And in workplaces where each employee has a space of their own, additional costs have to be considered for adding designated meeting and collaboration areas.

The latest solution that seems to successfully integrate the best of both worlds is the creation of “flexible” layouts. These offices combine aspects of both open and closed designs, offering desks where everyone can work collaboratively, and breakaway pods or quiet rooms where an employee can enjoy privacy, and focus on their individual tasks.

Another alternative is to have small pods of employees in their own offices with a closed door. This creates close-knit teams, ideal for groups that need to collaborate on specific projects. This set-up is particularly useful in decision-making, as it’s been shown that small groups are more effective in reaching consensus. Employees in this set-up get the benefits of open discussion and collaboration, in addition to the chance to work in a comfortable, low-distraction environment.

Tips on Making a Choice

Which workspace structure will result in the most productivity and employee happiness in your office? Long story short, it depends on your organization’s individual needs. It’s a good idea to consider how the workload is distributed: collaborative work will need open spaces that encourage discussion, while focus-intense projects like coding often require privacy for best results. Taking a survey of your employees is another great way to find out about their specific preferences.

Whether you’re looking to reorganize your company’s office space, update your policies, or even find temporary staff for your newly-updated layout, TPD will happily provide the right tools and expertise. Contact us today by email, or feel free to give us a call at 1.888.685.3530.